Spanish food makes up a great part of Spanish culture. Paella is one of the most distinctive Spanish dishes. You can see the posters everywhere offering you to taste paella. And it is really tasty! Let´s discover more about it!

So, Paella is a special rice dish which technically comes from the province of Valencia. In Valencian language “paella” literally means “frying pan”. It does make sense because, as you probably all have seen, it does have a close connection with a pen, both while cooking and serving it. Not everybody knows, though, that it is a very ancient dish originated into the modern version during the last three ages. The majority of Spaniards consider Paella as the national dish of the country while Valencians state, of course, than it is the identifying symbol of their region only. Whatever the truth is, the only clear thing as that you must try it while in Spain.

There are a lot of different manners how Paella can be cooked and served. The best-known types of Paella include vegetarian paella (paella of vegetables), Valencian paella (normally includes rabbit), seafood paella (only seafood), mixed paella (seafood and meat), among many other types.

Traditionally paella is cooked over an open fire, fueled by orange and pine branches along with pine cones, or at least it is cooked like that in Valencia. In this way, one can always smell a pleasant aromatic smoke. Also, a typical way of eating is directly from the big special frying pan called paellera in Spanish.

Thus, while in Spain, it is a must to try it. It is one of the most delicious and mos emblematic dishes one can find here. In Malaga we have a lot of places to taste it. Almost every restaurant has it on the menu. What about joining the students of Academia CILE and taste it together!? 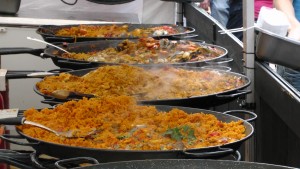 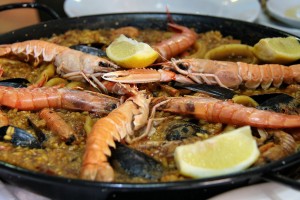 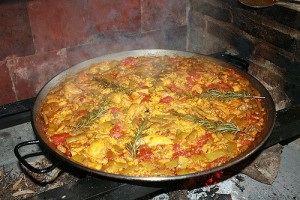