While being in Malaga you have a lot of things to try. Apart from being a place of a series of cultural attractions and discoveries, it also offers a great range of gastronomic variety. One of the things that visitors are attracted by the most , is, of course, the espeto malagueño, or so-called boquerón – Malaga’s anchovy.

You will hardly find this dish in the city center as the area where it dominates is the coastline. It’s simply impossible not to see some Spaniards at the beach frying those little fishes (the “pescaíto”) on the old fishing-boats that are held upside-down and are full of live coals bringing a unique scent. This delicacy is one of the stars of the dishes of Málaga and it is definitely a must-to-try while being in the Costa del Sol.

In the course of time the boquerón has become so important that people of Malaga started to jokingly identify themselves with it. Now there are lots of many songs and sayings that in some way connect malagueños with boquerones.

Thus, you have to put eating a boquerón in Malaga at the top of your list. Academia CILE suggests going out to the beach, grab cold drink with our students, and get your hands dirty eating those delicacies! 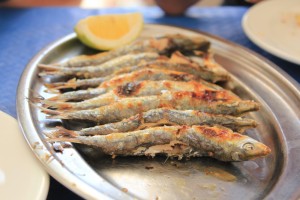 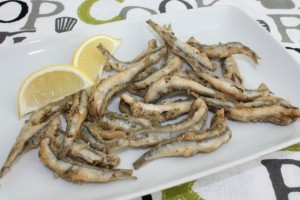