Museums in Malaga: CAC – learn Spanish in Malaga at Academia CILE
Posted on 4 August, 2016 in Spanish courses in Spain

There are many museums in Malaga to explore and el Centro de Arte Contemporáneo (CAC) ( The Center of Contemporary Art) is one of them. It was initiated by the government of Malaga in order to spread the plastic arts of the 20th and 21st centuries. The museum was officially inaugurated and opened to the public in 2003.

The building of the museum is particular. It is a former market – El antiguo Mercado de Mayoristas – thus it is a historic building projected in 1927 by  Luis Gutiérrez de Soto (the author of the Airport of Madrid (Barajas) in 1930). It was constructed in 1939 and it is a building that has its lower floor in a form of a triangular. In 1983 the building is not used for a market anymore and later it becomes a building of cultural use.

The permanent collection is evolving constantly. Apart from this there are always some new acquisitions facilitated by the government of the city of Malaga which  introduce constantly a serie of private collections of others artist for a determined period of time.

In academia CILE there are meny activities and museum visits. The CAC is always included on the list, of course, so being a student of our school you will be always able to have a guided visit over there! 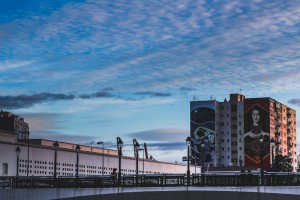