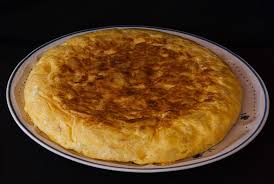 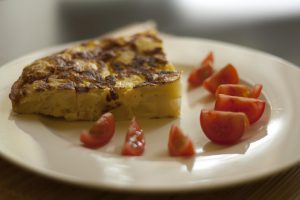 Let´s taste tortilla today! One of the highlights of Spanish cuisine…

Tortilla is a typical Spanish dish, consisting of an omelette made with eggs and potato, fried in oil usually only found in Spain

You can find this dish by two names: tortilla or tortilla española. We should probably leave it without translation as if one translate it to English as potato omelette, as some do, it would be wrong, as affirmed by the cuisine chiefs. According to them, it would be unfair to translate it like that because tortilla is more about potatoes than eggs and it is quite robust and gratifying, thus the word omelette does not fit here well.

It is widely eaten in all the country and even some other Spanish-speaking countries. It is also true that tortilla has a lot of  variations (from region to region), the basic version is made only with eggs and potatoes (and possibly the onion might be put into also). The inclusion of the onion is basically depends on the tenderness of the potatoes the locals have. In order to make the things clear, restaurants normally distinguish the simple tortilla de patatas and the tortilla de patatas con cebolla (with onion).

However it is served like – warm, cool or at room temperature – it tastes really great. It might be your perfect breakfast, lunch or dinner choice, as simply your snack or tapa.

Taste the magnificent tortilla española with the students of Academia CILE. You are gonna like it… for sure!