There are many traditions in Spain and they are all very interesting. In the province of Malaga, for instance, you can find Los Verdiales. Academia CILE will explain you more about it!

“Los Verdiales” is a festive manifestation of an old and peasant origin still practised in the province of Malaga. It is a particular manner of singing and dancing accompanied by a number of instruments: a violin, two to four guitars, a hand drum, one pair (or more) of castanets and sometimes a lute or other lute-type instruments.

When performing, all this is also accompanied by the involvement of the mayor who with a kind of bar called varilla points the singer and authoresses the start and the final of the performance.  There was also a tradition of make a special sound using a marine conch shell to notify that the group is coming for the performance.

Such a group – the combination of singers, dancers and players – is called Panda de Verdiales. The main fest of this tradition is held on the 28th of December each year –  festividad de los Santos Inocentes. It is also very tipical to see them during the Feria de Malaga. From 2009 on, the fiesta of Verdiales is being on the provess to be proclaimed as a “Bien de Interés Cultural” which is a category of the heritage register in Spain.

The name “los Verdiales” comes from one malagueñian regon where the cultivation of the olives denominated as verdial is common (from Latín viridis: green, young, intense), There is also a verse about los verdiales which has become like a hymn. In Spanish it sounds as the following:

Thus, what about joining the students of Academia CILE and exploring more about one of the deepest tradition of the province? We are waiting for you! 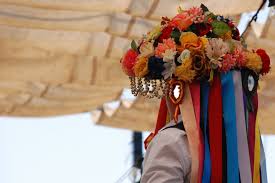 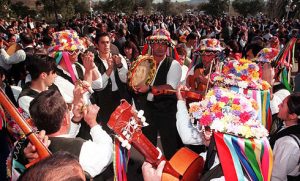 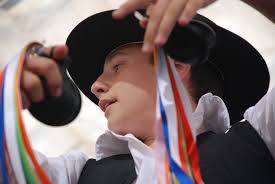