Gin beverage is one of the most exquisite strong drinks. Malaga city has a great link between this drink and history. Academia CILE wants you to learn more about it!

Larios is a common name to hear while in Malaga. The main street, for example, is called calle Marqués de Larios and leads to the main square of the city (Plaza de la Constitución). The street was inaugurated in 1891 by the engineer José María Sancha and later modified by Manuel Rivera. For its construction the sum of one million of pesetas (money of that epoch) was assigned which now would be equivalent to 6.000 euro. The great part of this sum was accumulated by the Larios family.

The architectural and urban importance of this street of the city cannot be denied as it is situated just in the centre by the most significant institutions and it includes many outstanding buildings, once constructed by Eduardo Strachan y Viana-Cárdenas. From the very beginning it had a strange mixture of usage as it was both pedestrian and for traffic. Since 2003 on, though, it became only pedestrian which let it be the most commercial and prestigious street, or boulevard, in the city. 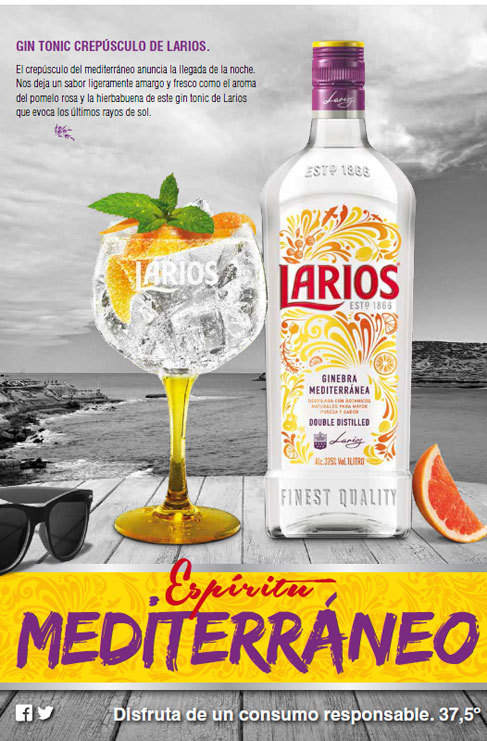 Gin “Larios”. The source of the picture

However, when one hears the word “larios” in Malaga, not necessarily one thinks about the main street. Another great representation of the Larios family and its name lies on the labels of one of the most famous gin beverages.

The history basically starts in 19th century when the factory of wines and brandies are established by Charles Lamothe his Spanish business partner Pedro Jiménez  (Jiménez & Lamothe). The third marquis of Larios – José Aurelio Larios – understood the importance of the growing market and decided to amplify its then possessed company – La bodega  de la Casa Larios – with the incorporation of Jiménez & Lamothe.

This is how it then became Larios & Cía. In 1933 Larios & Cía is converted to  Larios S.A., when a series gins were included to the production. Little by little “Gin Larios” became the gin beverage number one in Spain. In the 80´s it was recognised as the best sold gin beverage in Spain and the third best sold in Europe.

It was assigned a Golden Medal by the professional magazine Drinks  International among 37 of different gin branches worldwide. According to Milward Brown, 7 of 10 gin consumers prefer Larios branch. There are various tastes and names of Larios gins, as for example Larios 12, Larios Rose, Espíritu Mediterráneo, Calendario Larios, among some others.

Thus, as you have probably already noticed, “Larios” means a lot here in Malaga. For the history, for the well-known family, for the main street, for the gin beverages… Isn´t it marvellous how interesting it can be to discover such things? Academia CILE invites you not only to study Spanish but also to explore the world…. let´s start here in Malaga… in Larios street… with a glass of Larios gin…shall we? 🙂