One of the most distinctive festivals to point out is, of course, the fiesta of San Fermín! It is colled by locals Sanfermines and is held in honor of Saint Fermin, the co-patron of Navarre. It is celebrated in the city of Pamplona (region of Navarre in Spain) ant it has deep roots so far. It starts every year on the 6th of July at 12 p.m. and the opening is always marked by a kind of firework skyrocket, colloquially called chupinazo by Spaniards. It usually lasts til the midnight of the 14th of July, typically with the song “Pobre de Mi” (“Poor Me”)

The most distinctive feature of the festival is without any doubt the famous running of the bulls. It normally lasts from the 7th of July 8 a.m. till the evening of 14th of July. Thus it is a week of craziness and fun. The celebration also involves many other traditional activities and folkloric expressions. It has become internationally wide-known, especially in English speaking countries due to the novel The Sun Also Rises written by Ernest Hemingway

Now more that 1,000,000 people come to Pamplona to take part in this festival. Academia CILE understands the worth of the culture, so does it understand that these kind of fiestas are part of Spanish cultural patrimony. While you are here, we are always ready to get you to know all the exciting things that Spain has to offer. Are you about to explore more? We are waiting for you! 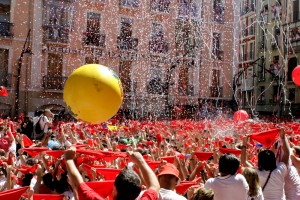 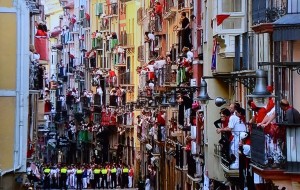 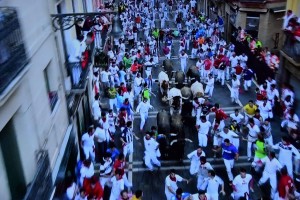