Pablo Picasso – interesting facts
Posted on 17 March, 2020 in English
One of the most famous painters was born on October 25, 1881 in Malaga (Plaza de la Merced 36) – Pablo Picasso. He was the son of an art and drawing teacher. He himself was not only a painter, but also a graphic artist, sculptor and co-founder of Cubism.
Picasso died on April 8, 1973 in Mougin and was buried at his own estate. He has created over 15,000 paintings, sculptures, ceramics and much more. 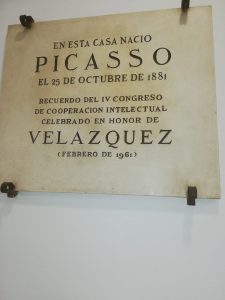 It was not easy to live a love life with Pablo Picasso, because he personally saw the love in the inspiration. He was energized with women who inspired him for a certain duration. After the inspiration was over, as for example with the russian ballet dancer Olga Chochlowa he was looking for a new inspiration, as in this case Marie Therese Walter.
During the relations with Picasso, the women were Picassos muse and support and was idolized by him and stood as a model for many of his works. Thus the women often did not come to terms with picasso’s intention to separate from them and the separation was painful and serious to follow.
Fernande Olivier – she was a model and Picasso’s first big love. They lived through a poor period in France, but both looked back very positively on it.
Olga Khoklova – after he got to know her by designing her stage costume, he was impressed by her exotic nature, the two married and got a child together (Paolo). The two separated, but never divorced.
Marie- Therese Walther – Picasso met her when she was only 17 years old. He was fascinated by their grace, beauty and youthfulness. They started an affair when he was still with Olga and Marie-Therese was his refuge from reality. She was never interested in his art because she was more interested in sports. Nevertheless, she inspired his works with her youthful nature. They got a child together and then Picasso separated, because the ease of the relationship had passed away.
Dora Maar – she was a woman who met Picasso on an equal footing, as she was a famous photographer. In this way, Picasso got to know another kind of relationship. Picasso immortalized her being in “crying woman”. Dora Maar always saw her predecessor as a hostile, which strengthened Picasso in his masculinity.
Françoise Gilot – she was a very strong woman and they didn’t bother Picasso’s previous relationships. She was a budding artist and picasso gave her two children. The relationship lasted nine years after she separated from Picasso. She was the only woman ever who separated herself from him. Picasso presented her in his works as act, flower or sun.
Jacqueline Roque – she was the woman who presented Picasso the most in his works. She spent time with Picasso before his dead. For her, he almost completely cut off contact with premature partners and children. After the death of Picasso, she killed herself.

Styles of his work

By each newly started or terminated relationship, also the styles of Picassos work changed as shown below. But also the meeting with important persons led to his styles ‘changed or adapted.
Already in his youth and childhood Picasso created works of art, of which, for example, “the communion” still exists. His father, who was also a talented painter, helped him to make Picasso a prodigy. He gave him the best training he could afford and visited numerous museums with him.
It was in Barcelona, where Pablo Picasso first came to prominence as an artist. He visited Els Quatre Gats – a café popular with artists, anarchists and modernists alike.
From 1901 until 1905 Picasso painted in his works mostly in the colors of blue and grey. In addition, a melancholy mood could be perceived in these paintings. It is assumed that the artist thus expresses his sorrow at the suicide of Carlos Casegemas. “The old guitar player” is a play for this blue phase.
From 1904 the blue phase turned into a pink phase and the paintings appeared more animated. This happened shortly after he had met the artist Georges Braque and the beginnings of Cubism were created.
The beginnings of Kubinism were traced back to the masterpiece Les Demoiselles d’Avignon. 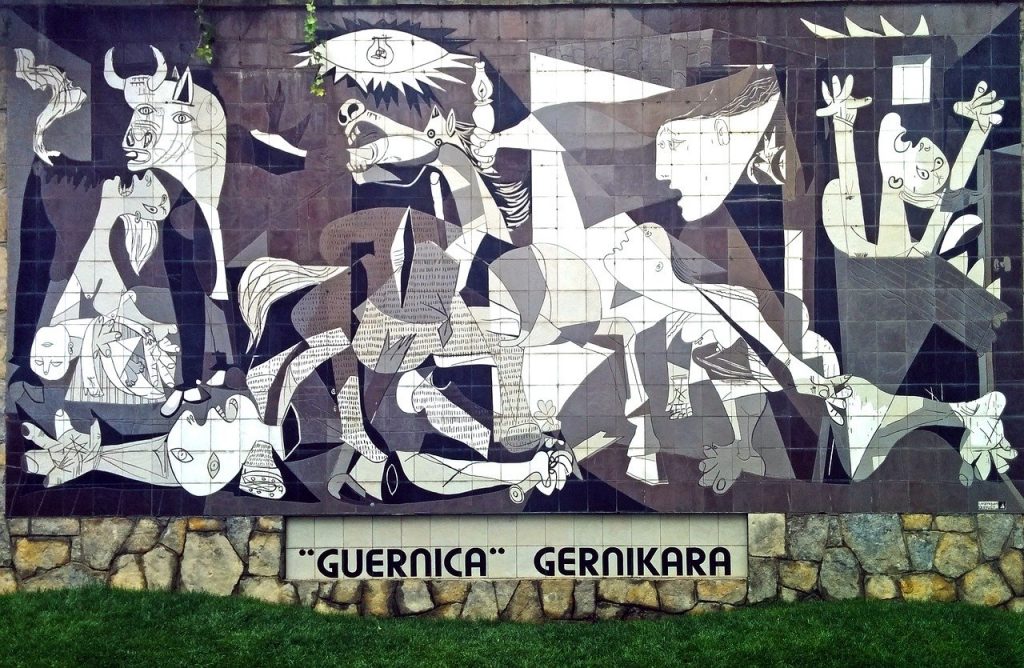 “Guernica” is one of Picasso’s most famous masterpieces. It was created in 1937 in response to the bombing of the Basque town of the same name by the German Legion Condor. In his paintings, Picasso also expressed the worldly situation and the corresponding human feelings in his own way. It still serves as an anti-war symbol. In order to be able to fully analyze the work, one should primarily focus on the coloring, visual complexity, the figures and the symbolism.

1.      Together with Georges Braque, Pablo Picasso is celebrated as a pioneer of Cubism
2.      His full name is Pablo Diego José Santiago Francisco de Paula Juan Nepomuceno Crispin Crispiniano de los Remedios Cipriano de la                            Santisima Trinidad Ruiz Blasco y Picasso Lopez
3.      He was a woman hero
4.      He was extremely productive and spent seven careers as a painter, sculptor, printmaker, poet, ceramicist, playwright and set designer
5.      He was suspected of stealing the “Mona Lisa” from the Louvre in 1911
6.      His first word has been “piz”
7.      From no other artist were stolen so many works
8.      The descendants opened in 2003 a museum dedicated to him in malaga
9.      The descendants feel partly honored and partly ashamed to be in direct contact with picasso