Strolling along streets in Spain brings pleasure to many people. The first visible difference which makes public places unique is exotic vegetation. You can find numerous types of flowers, such as hibiscus, strelitzia, oleanders and palm trees. Their vivid colours adorn the urban space of Malaga and Granada.

Buildings differentiate Andalusia from other regions of Spain. Every big city usually has some characteristic places or buildings called landmarks. The photos of them appear on postcards. Thanks to famous places, a particular city is easily recognised by tourists. There are several landmarks of Malaga: cathedral, the Alcazaba Fortress, the castle of Gibralfaro, port and Plaza de la Constitución. However, buildings in Malaga are distinctive. They are unique mainly because of colourful tiles which cover them.

Tin-glazed ceramic tilework with smooth or perforated surface are called azulejos. You can find them square, rectangular and starry. Their are produced in many colours, but the most traditional are those in colour white and blue.

They were used as ornamental art form to make detailed and beautiful mosaics. They consisted from several to thousands of elements. The compositions of azulejos covered the walls and floors in palaces and appeared as a decorative element in gardens, churches and monasteries. Besides, they tiled the walls of flats, including the walls in kitchens, bathrooms and corridors so as to provide these places with basic hygiene.

Azulejos depicted various allegorical, mythological, hunting scenes as well as scenes from the lives of saints or the Bible. The popular patterns used to ornament tiles were floral and geometric. The tiles improved the aesthetics of buildings. There are several ways to produce and techniques to decorate azulejos.

They were introduced in the Iberian Peninsula by Moors. Azulejos are especially popular in Spain and Portugal. The word azulejo could come from an arabic word azzelij ( or al zuleycha, al zuléija, al zulaiju, al zulaco), which means a small smooth stone. Another possibility is that the word azulejo might come from a Spanish or Portuguese adjective meaning green – azul.

What is interesting, the name of our school – Centro Internacional de Lengua Española is a pretty composition of tiles. You can see it when you are entering the school building. 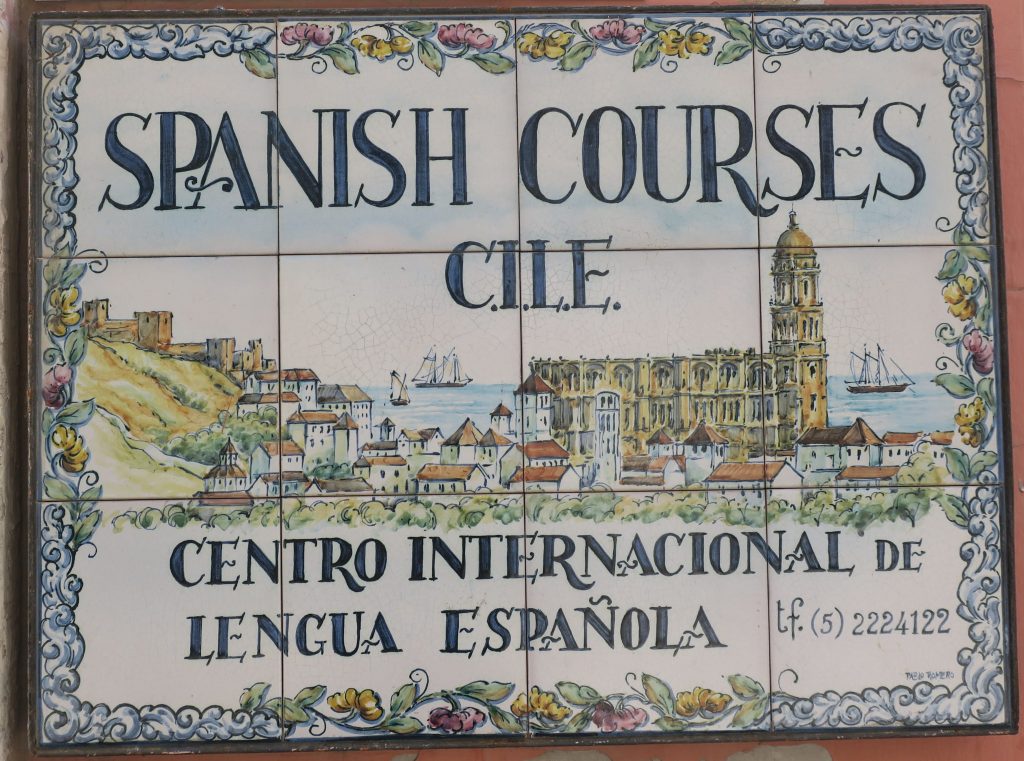 Having more free time, it is worth visiting the city Granada as there is a local factory of ceramic tiles. There are azulejos in numerous shapes, colours and with numerous patterns so it will be difficult to settle on just one. After the visit there, you could have a long walk along white, narrow streets in the Albacín district. You will find white buildings covered partly by impressive ceramic tiles and plates.